“Increasing demand for high power density is pushing developers to adopt 1,500V dc links in their applications,” according to the company. “However, 1,500V dc based systems pose more challenges on system design, which typically requires a multi-level topology, leading to a complicated design.”

As well as a higher voltage margine that its 1.7kV SiC mosfets, the company is claiming ten times lower cosmic-ray-induced FIT rate tested annywhere between 1.3 and 1.7kV, and the mosfet body diode is rugged enough for hard switching, it added. 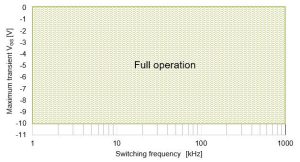 Gate safe operating area has been extended (left) compared with earlier parts, which previously  had a bite out of the bottom right, and only extended down to -7V with some parts.

These are built on the company’s recent M1H-branded SiC process. “The advancements enable a significantly larger gate voltage window that improves the on-resistance for a given die size.,” it said. “Simultaneously, the larger gate voltage window provides robustness against driver and layout-related voltage peaks at the gate, without any restrictions even at high switching frequencies.

2kV parts will be first be available in 19mΩ 40A form, with four mosfets and four diodes in a single EasyPack 3B package for 1.5kV photovoltaic string inverters (part DF4-19MR20W3M1HF_B11, samples now and production in Q3).

Next will come 3, 4 and 6mΩ die, in pairs as half-bridges in 62mm modules for traction inverters, electric vehicle charging and circuit breakers. (parts FF3.., FF4.., and FF6MR20KM1H, samples now and production in Q4).

Discrete mosfets and diodes in the TO247-Plus package pictured above are coming at the end of this year.

The 2kV parts were announced at PCIM in Nurembergnce – find Infineon on stand 412 in Hall 7.

This is the cheapest HDMI 2.1 gaming monitor ever — Daily deals