This is the surface-mount equivalent of a feed-through capacitor, with the end terminals connected together by a low-resistance direct path. This path is one end of the capacitor, whose other end is to be grounded via the centre terminal (which looks like two in the photo). 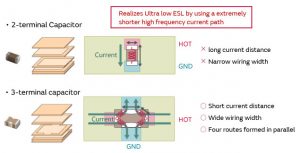 “By featuring a three-terminal arrangement, NFM15HC435D0E3 [as it is dubbed] exhibits a significantly lower equivalent series inductance than would be expected with two-terminal components,” according to the company. “This means that stable circuit operation can be supported: power decoupling and noise removal can be brought to automobile designs in which high-performance processors are being employed – such as for driver assistance systems and autonomous driving functions.”

Murata said the high capacitance density has been achieved using atomisation and equalisation of the constituent ceramic and electrode materials, as well as proprietary thin-layer forming and precision lamination.

“The number of sensors and processors in vehicles continues to grow,” said Murata marketing manager Takahiro Yoshida. “To support this trend, MLCCs with enhanced high-frequency characteristics and greater capacity, combined with minimal size, must be sourced.”

Although the company speaks of equivalent series resistance and frequency characteristics, these are not covered by the data sheet.

The NFM15HC435D0E3 product page is here, and the data sheet is worth a look if only because it include pages and pages on physical test methods and PCB mounting.