Designed by Belgian research lab Imec and nearby university KU Leuven, it was made by UK-based PragmatIC Semiconductor.

Part of the reason for this non-trivial power consumption is that there are no p-type IGZO transistors, so CMOS-like circuits are impossible. 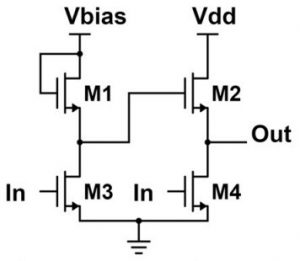 This has low output impedance and low output stage static current, at the expense of static current through the input drain loads (M1, for example) in some logic states, and the need for a separate bias voltage.

To simplify the design process, a library of standard transistors and logic was created, each dimensioned for best power/performance in the required functional blocks.

“Metal-oxide thin-film transistors based on IGZO are inherently n-type,” said Imec scientist Kris Myny. “This results in circuits with a higher static power consumption compared to complementary technologies. To address this, we created our own design-flow starting from the open-source file of the MOS6502 microprocessor. We engineered the number of cells and logic gates to obtain the optimal design for our flexible 6502 microprocessor in terms of area, power and speed.”

Much modelling and practical performance testing reduced the library to 23 standard cells, ranging from four to 54 transistors, of which 1,718 are used in Flex6502 – which is a simplified 6502 without the little-used decimal mode.

For testing the finished device, off-substrate level shifters were used to interface it to conventional silicon circuits including a 64kbyte memory, clock generator and UART.

As a demonstration, 195 lines of assembler written to implement Snake in a form that would run on an 8 x 8 character display using a UART-connected keyboard. The snake takes ~260ms to move one character at 10kHz.

The work was funded by the European Research Council, and produced a standard cell library for metal-oxide thin-film technology. “As such, this work nicely wraps up my ERC Starting Grant, which aimed at opening up new horizons in the field of thin-film transistor technology,” said Myny.